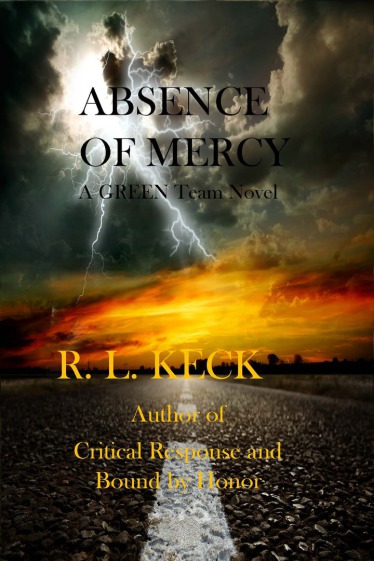 The final installment in the GREEN Team Trilogy: Absence of Mercy is now in first draft stage. Stand-by...it's going to be bloody!

Mack removed his helmet, rubbed absently at the scar on his face, and remained sitting in the saddle of his restored ’69 Norton Commando listening to the sounds of Florida that came quickly to fill the void that their now silent engines created. A fresh breeze soughed through the boughs of the live-oak trees bringing with it the myriad smells typical to late summers in the sunshine state: the earthy smell of freshly turned soil in the farmer’s field as he prepared for planting; and, the mouthwatering fragrance of Frank’s fresh grouper cooking on the open grill on the back porch of the rustic cafe.

Mack Turner looked at his reflection in the side mirror. He stood a little over six-foot one, and weighed a tad under two-hundred ten pounds. The black hair on his head was lightly salted with gray, as was his moustache. His face was unremarkable – except for the scar, of course. There were more wrinkles, he allowed, but that just made him more distinguished. Isn’t that what they said? His square jaw, thick neck and broad shoulders gave him the look of a professional ball-player, though he wasn’t. He was still in remarkable shape despite his age. At forty-seven, his one constant goal was to maintain his 34-inch waist as long as possible. So far, he was achieving it. His green eyes were alert and seemed to always be observing his surroundings. He would say it was just a habit, a residue of security training. His skin was deeply tanned from spending years on the ocean, and his body, strongly muscled from as many years engaged in intense calisthenics, still responded when called upon. His recovery time was longer now that he was approaching the big Five-Oh, but he could still PT with the best of them.

Mack closed his eyes and breathed deeply. “Ahhh,” he said as he exhaled. “Now that’s worth stopping for.” He pointed toward the small restaurant and got off his motorcycle. “The best grouper sandwich around, and I’m buying.”

“Sounds good to me,” E.J. said and placed his helmet on the left side mirror on the handlebars.

“Put your helmet there. It’ll damage the foam lining. You wouldn’t want to take a chance of compromising your safety, would you?”

E.J. lifted his lid from its perch and sat it on the seat instead. “Better?”

“Better,” Mack said as he came around the front of his bike. “Come on.”

Mack led the way up the wooden steps to the porch of the clapboard house that resembled a coastal fishing shack. He pushed open the batwing doors and stepped in, holding one as his friend entered after him. The décor was typical coastal Florida: heavy on the fishing theme, naturally, with crab traps and marker buoys hung from the rafters in the ceiling. Numerous varieties of trophy-sized fish were mounted on the walls, as were several photographs of the man who had caught them all – Frank McKiernan, retired U.S. Navy commander, Master Explosive Ordnance Disposal technician, and most recently: restauranteur.

Mack hailed his old navy buddy as he walked toward the bar. “Hey, Frank.”

Frank glanced up at Mack and E.J. as they approached. He was a large man. At six-feet-four he carried his two-hundred fifty pound bulk like an all-pro linebacker. He was in his mid-fifties with a full head of gray hair – which was still cut to military specs – and a perpetual tan that would make George Hamilton envious. His short, crooked nose and rugged, square jaw accentuated his drill instructor appearance. Frank had nearly finished shucking another dozen raw oysters for three rowdy college kids sitting at the bar.

“Hey, shipmate,” he said to Mack, and slid the platter of sliders over to the three Gators before offering his right hand to his friend. Mack just looked at the soiled shucking glove the big man was wearing with a look of distaste and lifted his right forearm instead. The two men bumped forearms in greeting and Frank indicated that Mack and E.J. should sit at the bar.

“Two of your best grouper sandwiches and a couple of Coronas with lime,” Mack said.

“Right, the Friday special; and your friend,” Frank indicated E.J. with the oyster knife dripping in his left hand.

“Funny,” Mack said. “Frank, I’d like to introduce you to a very good friend of mine …”

“Lieutenant Lonetree,” Frank finished for Mack. “If I’m not mistaken.” He slipped the glove off and offered his clean right hand to E.J. who shook it firmly.

E.J. knew the man meant well, but this was a sensitive subject and he deflected it. “Who would that be?” E.J. asked.

“Ole’ ‘Ass-Chapper’, he’s doin’ all right, I guess,” McKiernan stated and turned to get them their beers. “Not as happy now though, as he was when he was still an operator.”

“Oh, he stayed up in the Chesapeake Bay area. He had to be close to the action, even if he couldn’t be a part of it any longer.”

“I miss the old guy; I should try to get back up there to see him someday soon.”

“Take some time off,” Mack said. “It’s not very busy right now. We’ve settled in and it’s just routine maintenance and the like. If we get a call, I’ll notify you.”

E.J. considered for a moment. “Maybe I will.”